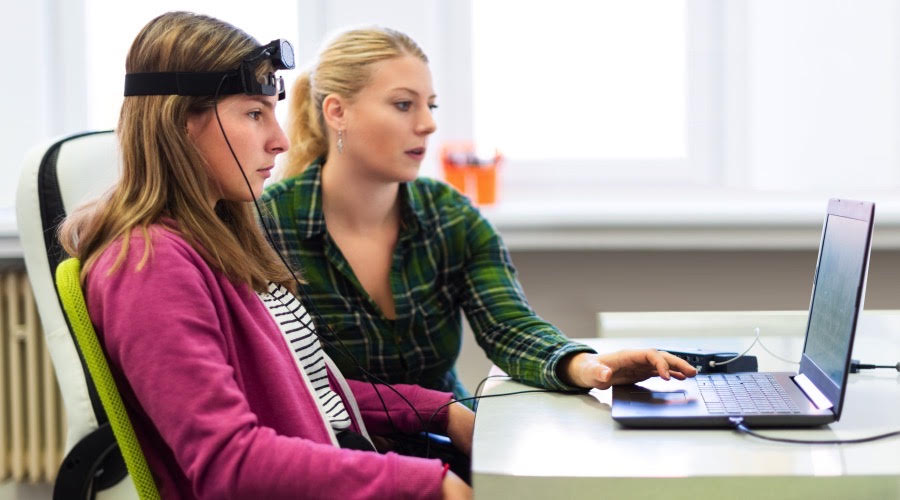 What is neurofeedback therapy?

Neurofeedback, also known as electroencephalography (EEG) biofeedback, is a non-invasive treatment that uses operant conditioning to target imbalances in brain wave activity. Traditionally, a neurofeedback session would occur with a practitioner who places electrodes on a patient’s head in order to record brain waves. These electrodes are also connected to a computer, which has software that can display the brain waves as a set of images and/or sounds in order for the patient to be able to witness their brain activity in real time.

Let’s discuss how neurofeedback therapy actually works. In the clinical sense, here’s an example of a patient benefiting from neurofeedback. Someone suffering from post-traumatic stress disorder (PTSD) may likely have an imbalance in their alpha and theta brain waves (both of which are associated with calm and relaxed states.) During neurofeedback treatment, the patient, hooked up to electrodes, will be able to see their alpha waves on the computer screen in front of them. The computer software then converts their brain waves into sounds, for instance, and when the software records their alpha waves being imbalanced, the sounds will sound cacophonous. Conversely, when their alpha waves show up as balanced, the sound will be lovely and pleasant. Through operant conditioning, the patient’s brain will be trained to maintain balanced alpha waves in order to avoid the unpleasant sound. As a result of multiple, consistent sessions, the patient’s brain will have been trained to sustain a normal alpha wave functioning, helping to decrease feelings of hyper-vigilance, anxiety, and stress, and having a greater ability to access feelings of calm, neutrality, and relaxation.

In a more do it yourself (DIY) sense, companies like Neuropeak Pro and Neurofeedback Rental USA offer clinical products that can be shipped directly to your home for use. Other companies, like Healium, are really showing off their tech savvy abilities, creating EEG headbands that pair with their augmented reality (AR) app that a user can access straight from their mobile device. These gadgets offer the same benefits that traditional, medical-grade neurofeedback therapy provides, but are more geared towards improving performance training, decreasing performance anxiety, and encouraging mental acuity, to name a few examples. In fact, research has shown that populations of athletes and dancers alike are benefitting from neurofeedback therapy. Even Philadelphia 76ers’ power forward, Tobias Harris, actively uses his own ‘at-home’ neurofeedback treatment in order to counteract the fatigue he experiences as an NBA player.

What technology is being used?

What truly makes neurofeedback therapy stand out from other treatments is its non-invasive, trauma-informed practice. During neurofeedback treatment, individuals suffering from mental health challenges have the option of not ingesting a prescription medication nor reliving traumatic events by recounting every detail to their therapist; rather, computer technology is used to encourage what the human brain innately does best- grow and rebuild itself.

During neurofeedback therapy at a clinician’s office, both computer hardware and software are being used for treatment. Hardware devices needed for treatment include the actual computer, keyboard and mouse, encoders, sensors, cables, and electrodes. The actual brain wave training, though, is being used by computer software programs that vary by company and patients’ needs. Some software programs will use the patient’s brain waves to play a movie for the patient to watch (and therefore the movie will play or stop depending on the brain waves’ activation), others will use varying sounds, as described in the example above regarding a PTSD patient.

As we’ll look into below, companies are engineering neurofeedback software to be less clunky, and optimize patients’ results. In a technical sense, a majority of the software programs used in neurofeedback treatment use Windows Operating System (OS) and can be installed directly on the computer’s desktop, making it user-friendly for both practitioner and patient.

In our IoT blog series, we discussed IoT as wearables; neurofeedback technology is starting to shift into that direction, from strictly being a clinical practice, to being an at-home, wearable tool for individuals to connect with their smart devices to meet specific health goals. Consider a wearable headband that can record, analyze, and assess your brain waves; this headband is also connected to an app on your smartphone, or even smartwatch, where you can view your brain activity and train your brain to achieve your set goal (e.g. increase concentration, track mood, etc.) The possibilities for neural sensors to be implemented into IoT technology for the purposes of neurofeedback therapy are abundant. From its background in psychiatry and neurology, to now becoming an upcoming health tech trend, neurofeedback treatment will become the new IoT device we should all be looking out for.

With an increase in research studies assessing the benefits of neurofeedback, companies all over the world are competing to build the best products for practitioners to use for their patients, and for healthy individuals to use on their own, at-home, for overall improvement. Below are five companies creating cutting edge neurofeedback technology for users both in the clinical space, and right at-home.

Alaskit is a team of engineers working together to make brain technology more accessible for everyone by using the Crowd Supply platform for support in their efforts. Alaskit has created an inexpensive headband used for hemoencephalography (HEG) neurofeedback that connects to open source software via bluetooth and wifi. Alaskit states that they are hopeful that their IoT technology will support the end of the mental health crisis that is currently plaguing the world.

Thought Tech is a Canadian company that has proudly created neurofeedback instruments since 1975. Thought Tech mentions that their products are meant to be used in the therapeutic setting, as well as in peak performance enhancement settings, like in athletics. This company constructs both hardware and software tools that support neurofeedback sessions for a myriad of individuals who would benefit from this form of treatment. As mentioned on their website, their ‘Biograph Infiniti’ software “provides a multimedia rich graphical experience, while capturing and analyzing raw data.”

Narbis is a company that invented their own wearable IoT technology. Their headset, with an attached armband and set of smartglasses, promises to help children concentrate on their schoolwork while avoiding distractions. Whenever the neurofeedback technology processes that the student is being distracted while doing homework, the smartglasses will change in tint, alerting the user to focus on their task. Narbis contracted a company, Chateaux, to create a user-friendly mobile app that would allow the user to view their brain activity, via the Narbis neurofeedback headset, on their mobile device in order to track progress.

DEYMED Diagnostic is a Czech company that services 38 countries around the globe with its state of the art neurology technology. DEYMED Diagnostic asserts that they partner with leading healthcare professionals in order to assure that their products are fit to serve patients’ needs. Their handheld TruScan LT product allows neurofeedback practitioners to connect their patients’ brain waves to the DEYMED Diagnostic software with ease. This company also offers a modern software technology that supports 3D games with clear graphics for patients to train their brain waves using a more current and user-friendly approach.

What to watch for

As mentioned, neurofeedback therapy is becoming increasingly popular in the helping and healing professions, and for the everyday person looking to improve different facets of their health. More research is expected to be released on the benefits and effectiveness of neurofeedback for all sorts of mental disorders and for overall self improvement. Though the DIY neurofeedback tools seem to be geared more as life enhancers, compared to how in-clinic neurofeedback tools are used for treating mental disorders, neurofeedback technology is continuing to be (re)invented, and we should be keeping an eye out for this revolutionary way of supporting our health using technology.